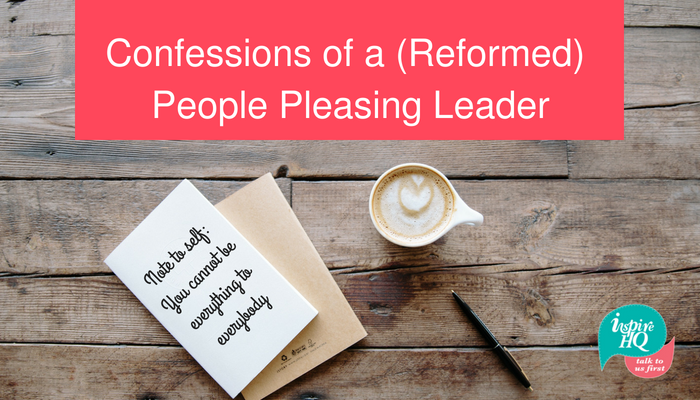 “In trying to please all, he had pleased none.” Aesop

Do you find yourself saying yes to things you have no time or energy to complete? Do you shy away from difficult conversations? Do you find it difficult to ask for help? You too could be a people pleaser.

Early in my career, my focus was on being the ‘nice’ manager, making sure my team was happy. In other words taking the path of least resistance. This is what makes a productive team, right? Wrong. After only a few short years, the warning signs were there. Conflict was rising, we were missing deadlines and I worked back most nights to get it all done. Then there was the time I had no staff because I’d said yes to everyone’s leave requests! But it didn’t really hit me until I heard someone describe me as ‘lovely, a nice person, but, well, useless really’. Ouch! Finally, my pride was screaming at me louder than my need to be liked. I knew I needed to change my people pleasing ways.

What are the traits of a people pleaser?

According to Dr. Beatrice Chestnut, author of The 9 Types of Leadership: Mastering the Art of People in the 21st Century Workplace, people pleasers (or befrienders) “tend to be friendly, upbeat, and generous (to a fault). Their focus of attention is on other people, on important relationships, and what other people think and feel about them. They pay a lot of attention to whether or not others like them and they strive to be indispensible and approved of in the eyes of others.”

In my career I’ve worked with, and coached, leaders with varying levels of the people pleasing gene. For me personally, I was never a doormat or a pushover, but I was a ‘version’ of myself, tailor made for whoever was in front of me at the time. Others I’ve worked with have taken it to the extreme, making their need to be liked and dodging difficult conversations look like a national sport.

As a leader, not everything about being a people pleaser is negative. When we can find balance between meeting our own needs, as well as those we lead, we bring some great qualities to the team. As a reformed people pleaser I have developed some great superpowers:

That last one came as a shock. I had avoided conflict for so long, when I finally started tackling it head on, I found I was good at it. In fact it became a significant part of my role as a HR Manager. Do I still get butterflies when I walk into a tense conversation? Absolutely. I wouldn’t be human if I didn’t. But now I am armed with an ability to understand the feelings and needs of others, and getting others to do the same.

I’ve seen first-hand the damage that can be done, at both the team level and business-wide, when a leader focuses too heavily on being liked. Here are some real life examples:

What have I learnt?

It’s been a slow bumpy journey, changing the behaviours of a lifetime. But I can honestly say it is worth the effort. Not just for the boost it gave to my career, but all the times I’ve genuinely helped someone to become more self-aware, set their own boundaries or take on a new challenge.

We all have our own key behaviours we’d like to change. Here are the few that worked for me:

It’s perfectly normal and healthy to say ‘no’. For the past ten years I’ve worked part-time to manage my work, with my family and community commitments. I no longer have the luxury of working extra hours, so I’ve learnt to identify what is important and say ‘No’ to the rest. This means I’m also not committing my team to unmanageable workloads.

I no longer feel the need to always be ‘available’, if being available means all my spare time between meetings is filled with satisfying other people’s needs. I’m no longer interested in writing reports or answering emails in the evening. When I had an office, I’d literally close the door. Now I block out chunks in my diary and my team know not to book in anything else.

There was a time when I’d run every major, ok and quite a few minor, decisions past the team. I was working on the belief that decisions made by consensus are always more moral, somehow more defensible. What I found was this became very time consuming and not uncommonly, resulted in a watered-down decision or no decision at all. For most issues, all people want is to be heard, then they are happy for someone to make the decision for the group.

Just Do It! Myself

If someone hadn’t done something right, rather than give that person feedback, I would just go in and fix it myself. Why I ever thought they wouldn’t know I’d made changes. So the end result was that they knew their work wasn’t right and assumed that I didn’t want to talk about it.

By avoiding this conversation, and any conversation that includes constructive feedback, I was making an assumption that they couldn’t handle the feedback. How patronising of me to not allow them to own their own behaviour or performance, and take away their opportunity to learn and grow.

Most people don’t like change, even those of us who say we do. As leaders, sometimes we have to make unpopular decisions. If we focus on pleasing everyone, rather than doing what’s best for them, we limit our business’ ability to innovate, adapt and grow. At its worst, I’ve seen a lack of decision making lead to job loss and that is not what anyone wants.

Disappointment, frustration and anger are a normal part of life. Just like we can’t protect our kids from it, neither can we protect our staff. That means we can’t treat them like friends. They are looking for a leader, not a new BFF. They need direction and feedback to achieve and grow.

Do I get it right all of the time?

No. Occasionally I slip back into that mode of thinking it’s my job to make someone else happy. Then I remind myself that it is them, and them alone, who are responsible for their emotional state. In any given situation, my priority will always be the people first, I’m hardwired that way. But now rather than focusing on making them happy, my goal is to make them feel respected, valued and engaged.