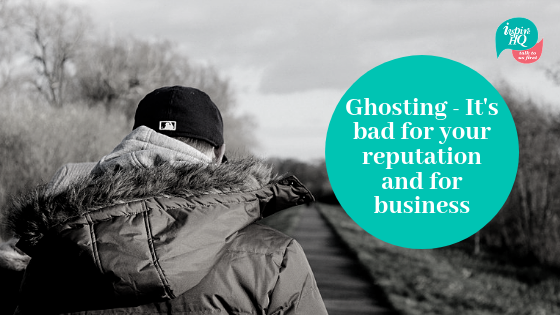 Ghosting is on the rise when it comes to recruitment and employment and it’s not a pleasant experience for anyone involved.

What is Ghosting? Ghosting in the relationship world is the term used when a person in a relationship cuts off all communication with the person they are dating without any warning or communication prior. They simply just disappear, become a ghost.

Ghosting no longer just occurs in relationships and is becoming increasingly common during recruitment processes and in the early stages of starting a new job. Let me share some examples:

Ghosting is on the rise because of the current market conditions. I think there are some people that just don’t want to work but in the majority of Ghosting situations that I have heard about or experienced, I think Ghosting has been the easy way out for the Ghost-er.

Unemployment rates are low, there are candidate skills shortages being experienced across many sectors, competition for talent is high and this creates opportunity for job seekers. Job seekers are often applying for multiple positions and counter offers are in abundance in these market conditions. Job seekers then don’t have the courage to have the difficult conversation to let you know they have been counter offered and no longer want to accept your job and are withdrawing. Or they have another interview and prefer that position compared to yours but don’t want to offend you and withdraw their application. So they simply Ghost you. Disappearing, never to be heard from again.

The problem is that Ghosting has different flow on effects in a regional city like Ballarat. Chances are that you will cross paths with your Ghost-er at some stage in the future. Maybe you’ll end up standing next to them at the register at the supermarket or be sitting next to them at the hairdressers or your children end up in the same class at school and become friends. Awkward! Ghosting destroys your reputation, credibility and demonstrates your true values.

A few years ago we were working with a candidate to place her in a role with a client. She had been through the entire process but started to get a bit funny about providing referees. That was the first sign. Then she completely disappeared. After multiple attempts to try and contact her we gave up. Can you imagine our surprise when she applied for a position in my team at Inspire HQ recently. This lady had some good skills but I had concerns because of how she had conducted herself a few years ago. Her previous behaviour had demonstrated her values did not align with how we do business. Had she forgotten how she had behaved in the past or was she just bold enough to try her luck? I contacted her and reminded her of our past dealings and gave her the opportunity to explain her actions from our previous dealings. Guess what – I never heard back from her! Maybe she was embarrassed?

Ghosting impacts everyone negatively. It wastes peoples time, it costs businesses money, it can cause worry and stress that something may have happened to the Ghost-er. It damages your reputation if you are doing the Ghosting. Instead be brave, have the hard conversation, be honest and move on. Taking that path won’t damage your future chances of work with that employer.

If you’ve been Ghosted, look on the bright side, as frustrating as it is at the time, you probably actually dodged a bullet. It would have been much worse to invest time, money and energy in to training a new employee who doesn’t share the values you want in your workplace.

Angela Connor is the Founder and Director of Inspire HQ, one of regional Victoria’s leading recruitment, human resource and career coaching companies. She understands the significance of having the right team of people in a business and is passionate about helping business to attract, recruit and engage the right people so those people can inject their talents into the business; creating an environment where they can do great work and love what they do. Find more useful information and advice at www.inspirehq.com.au or by following Angela on LinkedIn.