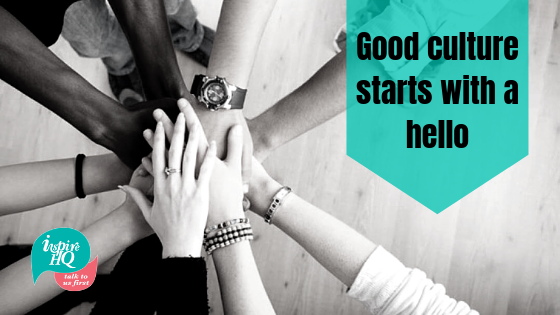 Workplace culture drives our success in business. Poor culture leads to high staff turnover, disengaged and unmotivated employees which in turn impacts quality of service, poor productivity and engagement, poor output and ultimately poor business performance. Poor culture is costly and can directly impact the bottom line. Some businesses do culture well and some never get the importance or impact culture has. There are many things that impact culture and in my experience culture is something an organisation constantly needs to work at. Sometimes it’s the little things that make all the difference when it comes to culture. And that includes starting the day with a Hello.

These are simple words. You possibly don’t even really think about using them but is the lack of a simple hello killing your culture?

I can’t imagine walking into work of a morning and walking past team members and not saying hello or acknowledging them. A simple good morning is just common courtesy, it’s the polite thing to do. It sets the tone.

Recently I was interviewing a candidate who was extremely unhappy in her job. She was explaining that the culture was poor. As we talked about what she wasn’t enjoying about her work environment she explained her Manager rarely said good morning to her and she could go most of the day without having a conversation with him. How did that make her feel? She wanted to leave the business and find a role with another company that had a better culture. There were many other things from a culture perspective that impacted her decision to look for another job but it all started with the lack of a simple hello. It was a lack of acknowledgement, a lack of respect and he was sending her a message that he didn’t care or value her. Her workplace is not a big workplace, he really wouldn’t have had to go out of his way to make an effort to walk around the workplace and say good morning to every staff member but he chose not to make the effort.

Saying good morning isn’t just important by managers and leaders in the business; it’s also critical amongst employees. Small teams or large teams, big business or small business, open plan or separate offices; making an effort to say good morning to those you work with has a big impact on culture. I’ve had a lot of candidates over the years make comments about the impact of not saying good morning. If someone chooses not to say hello, often other team members get to the stage where it irks them and they then decide not to bother themselves with making the effort. Two wrongs don’t make a right but if your engaged and motivated team members stop saying good morning because of their frustration with others not acknowledging them poor culture starts to breed and spread throughout the team. Before you know it, no one is saying good morning, the environment becomes uncomfortable and tense and the ability to work effectively as a team starts to unravel.

I remember a previous work colleague telling me about how when she first started in the workforce (we are talking maybe 25 years ago), in her first job on her first day, the manager took her around the business and taught her about saying good morning to all her team members. We have often talked about this learning and how it impacted her. During all the time this employee worked with me, every morning she would walk around our office and make sure she said hello to every team member. She made an effort, every day to greet every team member. By doing this she helped set the tone for our environment for the day. It took probably less than 5 minutes, sometimes she would stop and chat sometimes it would be a simple “hello how are you” on the way to the kettle to make a coffee or while she was hanging her coat on the coat rack. It didn’t take much time or much effort, but it made a big impact on our culture.

On the flip side I’ve heard no end of excuses as to why someone shouldn’t have to bother with saying hello. I’m not a people person, I’m reserved, it’s not in my nature, I’m an introvert, I work in a big office it would take too much time, I’m not a morning person, I’m not at work to be friends with my colleagues…….

Saying hello has nothing to do with personality or style or being friends. Saying good morning is about courtesy and respect and being polite. Would you not say hello to a customer? If you work in a big workplace, maybe you don’t say hello to every single person but saying hello to those that sit or work around you should be a non-negotiable.

Culture starts at the top but we all have a role to play in creating the workplace culture we want. Are you killing your culture by not making an effort to say a simple good morning?

Angela Connor is the Founder and Director of Inspire HQ, one of regional Victoria’s leading recruitment, human resource and career coaching companies. She understands the significance of having the right team of people in a business and is passionate about helping business to attract, recruit and engage the right people so those people can inject their talents into the business; creating an environment where they can do great work and love what they do. Find more useful information and advice at www.inspirehq.com.au or by following Angela on LinkedIn.