In general terms, I think I am a pretty good team player. I’m usually positive, get along with others and work towards leaving the workplace better than how I found it. However, there was a time in my career where I got sucked into the negative vortex of a couple of colleagues and I became that employee that I’m usually brought in to performance manage. I talked about other staff behind their back, spoke ill of the organisation and focussed more energy than was healthy talking to others about who or what was to blame for this perceived mess. I at least had enough self-awareness to know that my behaviour was toxic for the business and my health, so I left. It wasn’t until I had some distance, that I could see that there wasn’t any gaping holes in the business, just my perception of it.

Examples of my negative behaviour or variations of it, are found in most workplaces. Gossiping, fault finding, blaming, bad mouthing the business and conflict. Left unchecked all can become toxic to the business and the people within it.

So, what is at the root of all this dysfunctional behaviour? I, and many others, had fallen into the ‘us and them’ trap. It’s human nature to want to belong to a group, but when the ‘us’ is focussed on looking for what’s wrong, then we need to consciously choose between the cost of belonging vs a positive workplace.

Tell me if you’ve heard this one: Person A (persecutor) has an issue with Person B (victim), rather than telling Person B, they complain to Person C (rescuer). Quite often Person C, will then tell Person B, either in attempt to resolve the issue or to perpetuate the gossip. And thus, the aptly called the Drama Triangle[i], is formed. You can see how this can quickly spiral out of control, the victim becomes upset, finds their own rescuer, and the cycle continues. This, often passive aggressive, behaviour can be difficult to break. Let’s look at which role in the triangle we might be playing, and what we can do to break the cycle. 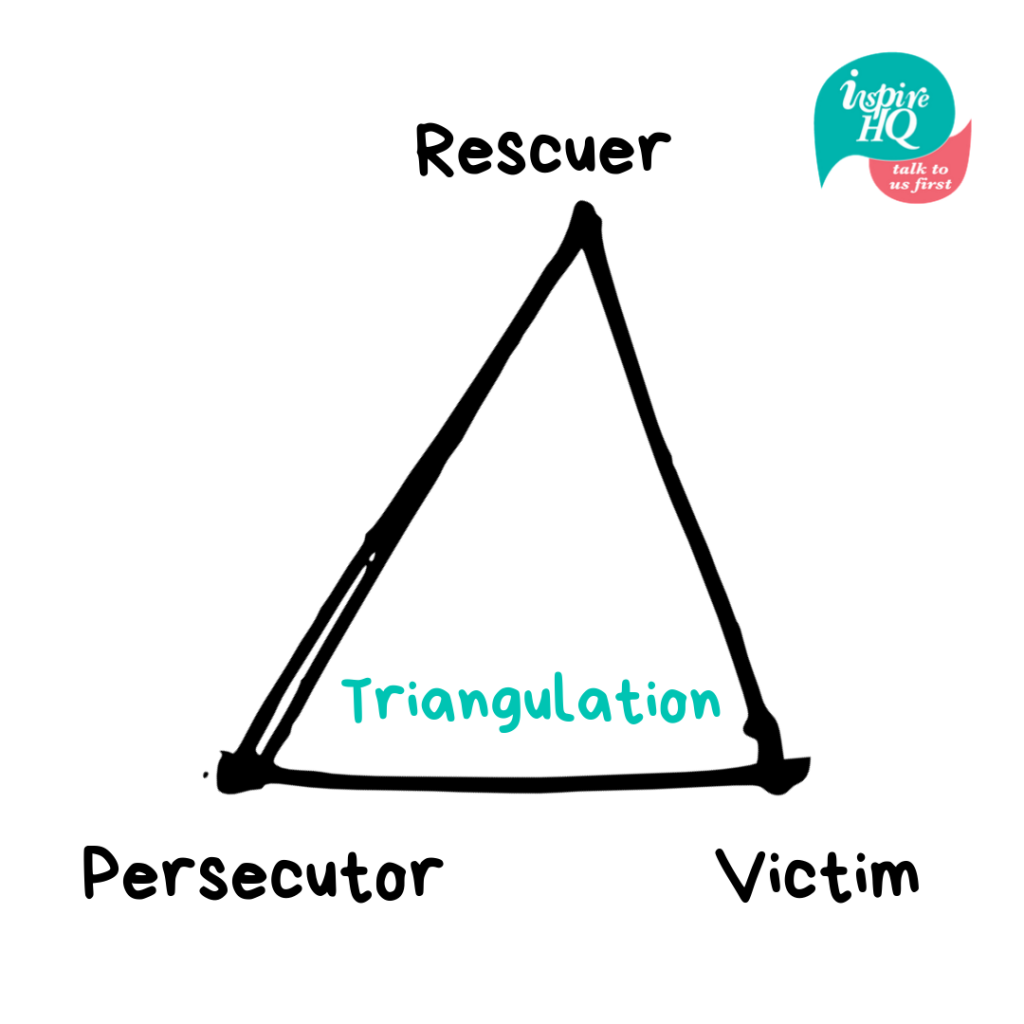 Victim – the person who feels wronged

We often don’t choose to be the victim in the first instance, but how we behave once we know, can have a significant impact on the relationship. It’s normal to feel hurt that someone didn’t feel they could come to us directly with their concern. It is also normal to feel embarrassed that it’s been discussed with others (particularly your boss). You can either choose to remain the victim, garnering support for how you’ve been wronged, or take control and have the courage to deal with the person directly. In a non-confrontational manner, let the person know you are aware there is an issue, you’d like to hear their concerns and try to find a resolution together. How you react to the feedback will dictate how much they tell you (now and in the future). For tips on how to receive feedback, check out our article on Seizing Feedback.

Persecutor – the person that made the victim feel that way

By using a rescuer, you are not only shifting the responsibility from yourself to someone else, you are also giving away your power to resolve the issue. Going to the person (victim) directly gives you the best chance of finding a resolution and if you can’t, you can find someone together to act as your mediator. This approach tells the other person your relationship matters, that your priority is to find a solution and that you trust them to work with you. Going behind someone’s back makes you untrustworthy, and none of us want to be known as that.

Rescuer – the person the persecutor goes to for help

People chose us to be the rescuer for two reasons, either they don’t have the confidence to resolve the matter themselves or they know you’ll absolutely agree with them, thus reinforcing their view of the situation. Regardless of the reason, you need to decline to be the middleman and, if needed, coach them on how to have a more productive conversation with the other person. The emotional burden of continually taking responsibility for other people’s conflict is exhausting, believe me, I know.

By stopping the triangulation, we remove all the roles and turn a toxic situation into a straight-forward conversation between two people. It takes courage and possibly skill development, but will result in the open, trusting and productive culture we all want to work in. 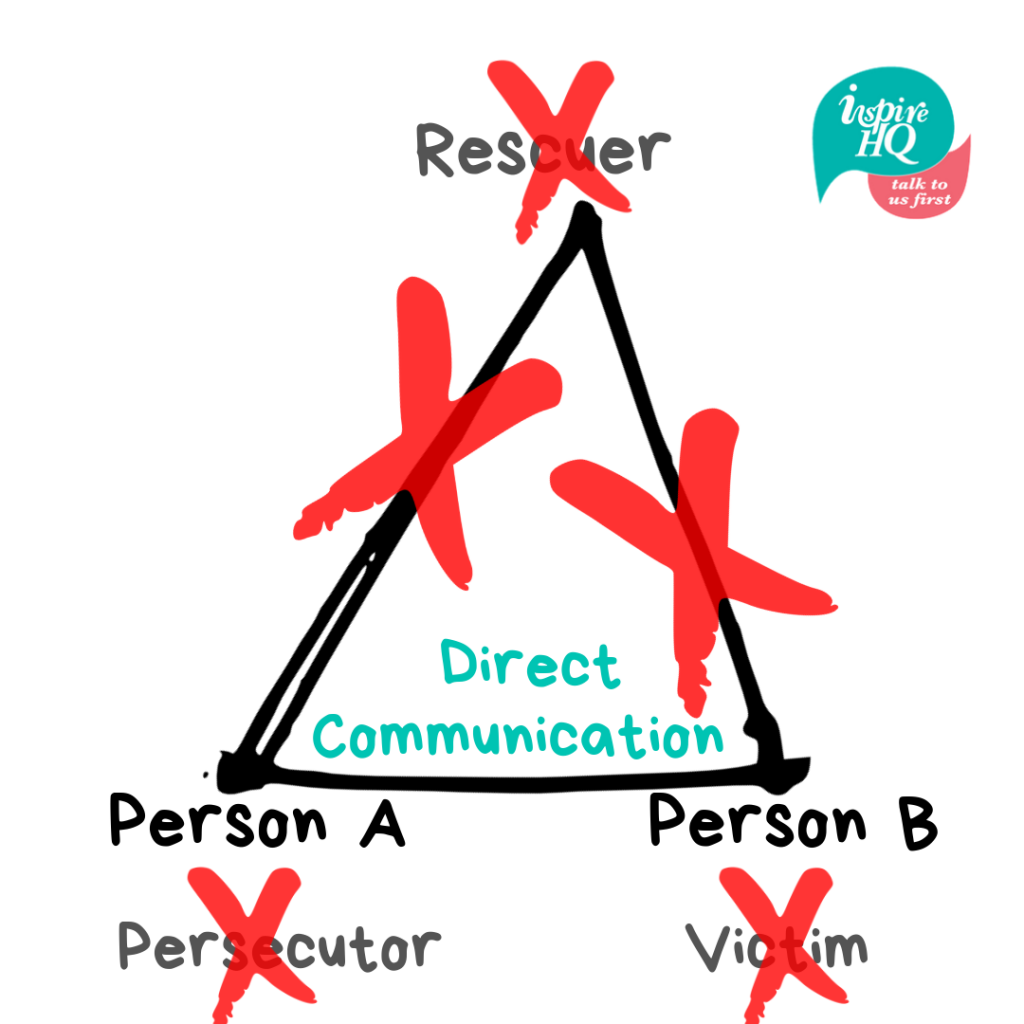 [i] The Drama Triangle was originally conceived by Steven Karpman, in the workplace it has become the popularised term triangulation.